In 1995, Secretary Betty McCain of the Department of Cultural Resources issued the following Proclamation: “The Corolla Wild Horses are one of North Carolina’s most significant historic and cultural resources of the coastal area.” In May of 2010, Governor Beverly Purdue signed legislation designating the Colonial Spanish Mustang as the North Carolina State Horse.

If a wild horse becomes too habituated to humans, becomes seriously ill, or is critically injured, the Fund may have to capture and permanently remove them. We also must remove and raise orphaned foals.

Once rehabilitated, a wild horse cannot be returned to the wild because it has been exposed to domestic horses either at the equine hospital or stable where it received care. A disease could be carried back to the wild herd for which they have no immunity. Additionally, in the course of saving it’s life, the horse will require extensive handling and will likely approach humans if returned to the wild.

The adoption commitment begins before ever bringing your mustang home, and includes several hours of intensive, hands-on work with the horses and CWHF staff. To get started, please fill out this pre-adoption form and email it to the Herd Manager.

READ ABOUT OUR HAPPILY ADOPTED HORSES 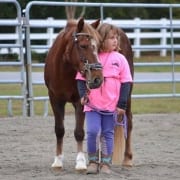 Tresie is a 13 year old mare who was rescued from the wild in 2006 with a severely injured right hind hoof. After surgery and a cast for 6 weeks she recovered and is now completely sound. Tresie was adopted by a great family in 2012 but came back to CWHF in the spring of 2017 due to circumstances beyond the family’s control. We were so thrilled to have this lovely mare back on the farm, but we were even more thrilled when she found her new little girl. Grace is a member of the Wolfpack 4-H club and worked with Tresie under the supervision of our trainer. The Hampton family adopted Tresie in the summer of 2017 and she now lives on their Currituck farm with other horses, goats, and her best friend Grace. 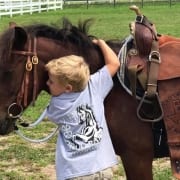 Our sweet Noel was adopted by a wonderful family and is staying right here in Currituck County. Harrison is in the Wolfpack 4-H Club and met Noel during a meeting at the rehab farm. He and his mom Sarah spent several months getting to know Noel and their family decided that she would be a great addition to their family. Noel now lives with a couple other horse friends and a goat who she shares her hay with. Harrison is learning horsemanship and riding and Noel has found a home that is perfect for her. 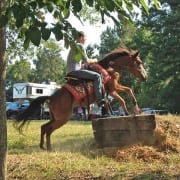 Our wonderful Creed now resides in Asheville, NC with his new owner Jim Kelton and will take part in endurance riding. It was bittersweet to see him go, but we are very happy and proud of him.

Creed is a Colonial Spanish Mustang. He was born in the wild in May of 2006, north of Corolla. Creed is coming along nicely under saddle. He was trained at Mill Swamp Indian Horses in Virginia, where young riders enjoyed long trail rides with him, and he was praised for his athleticism and endurance. Herd Manager, Christina Boucher-Reynolds rode Creed in a competitive obstacle course challenge in which he performed admirably. 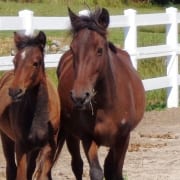 Krysta and her family have adopted Marta (now named Katalina).

Katalina will be trained with the help of Steve Edwards, Mill Swamp Indian Horses. 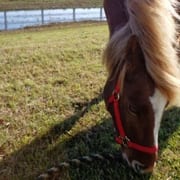 ADOPTED Summer of 2013! Her new home and family are in Kentucky! Flicka is a beautiful chestnut mare with a flaxen mane and tail. She was removed from the wild because her foal, Felix, was in need of veterinary care.

Flicka has begun her ground training as is extremely sweet and calm. She is learning to lead, lunge, and pick up her feet. Flicka is 12 hands tall and will be an excellent horse for a child. 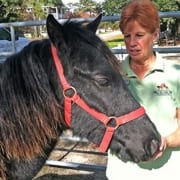 On June 29, 2012, Firecracker was found with an infected umbilical cord. For fear that without treatment, and possibly surgery, he would become septic and possibly die, Firecracker and his mother were removed to receive veterinary care. After a thorough exam by the veterinary it became apparent that something was also terribly wrong with his mother. She was shortly diagnosed with Red Maple poisoning, caused by ingestion of wilted Red Maple leaves. Her health quickly deteriorated and she was humanely put to sleep.

Firecracker has made a complete recovery and is being fostered in Smithfield, Virginia. Firecracker was born April 28, 2012. 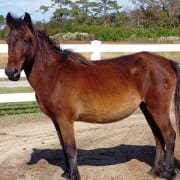 ADOPTED Fall of 2013! Maria and Carlos were both adopted by the same family, and their new home is in Tennessee! It is reported that Tennessee pasture grass might just taste better than dune grass! Carlos was born in the wild and found abandoned in the summer of 2013. At the CWHF rescue barn, Maria and Carlos bonded quickly.

Maria was rescued from the wild with a severely lame left hind hoof in September of 2012. Maria is now fully recovered and has begun her ground training. She is learning to lead, lunge, and pick up her feet.

Maria stands at 12.2 hands. She has a kind eye and sweet disposition. 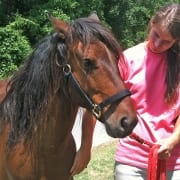 Rico was removed on July 16, 2012 with a fractured coffin bone and loose bone fragment. Surgery to remove the fragment only has a 10% success rate and a 90% of permanently crippling him. Instead of surgery, Rico’s lower right front leg was put in a cast for several weeks, and his status was monitored closely.

Rico can now put full weight on his injured right front hoof and trot without lameness. In fact, Rico is now fully saddle trained and can give rides to small children and small adults. He is in excellent physical shape, and he enjoys the company of people. He will let children pet him for hours at a time.

Meet Thunder, a beautiful bay Colonial Spanish Mustang gelding, removed from the wild herd in January of 2012. Thunder is a handsome three year old born May, 2009. He stands at about 12.5 hands and is still growing. From January 30 to May 9, 2012, Thunder was enrolled in the equine technology program at Martin Community College. He is now started under saddle and has excellent ground manners. As of September 4, 2012, Thunder will be living in West Virginia with his new forever family. 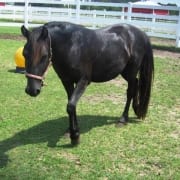 This is Ash, a two year old black Colonial Spanish Mustang Gelding, removed from the herd in January, 2012. He is an absolutely gorgeous horse with classic Spanish carriage, standing at 12 hands. Ash is currently being trained by our herd manager, Wesley Stallings, and is progressing very quickly. He now has learned to stand tied and for the farrier, load into the trailer, lead and lunge, bath, and much more! Ash is extremely gentle and loves attention.

Update: Ash has been adopted and now lives in Chesapeake, VA along with Solomon. 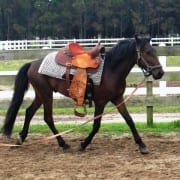 Solomon is a handsome bay gelding removed from the wild herd of Colonial Spanish Mustangs January, 2012. He was born the spring of 2009, stands about 12.5 hands, and is still growing. From January 30 to May 9, 2012, Solomon was enrolled in the equine technology program at Martin Community College. He is very light and smooth under saddle and has almost perfect ground manners. He will be continuing the rest of his training with the herd manager until he is adopted.

Update: Solomon has been adopted and is now living in Chesapeake, VA with Ash. 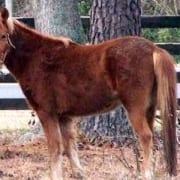 Bonita has been very happily adopted by Tami Thurston of Tarboro, NC the director of the Equine Technology program at Martin Community College and owner of Thurston Quarter Horses. Bonita has finished her training in the equine program at Martin Community College and has moved to her new home. She has made an excellent recovery from the injury she suffered in the wild before she was rescued and we eagerly look forward to following her progress as she finishes training in her new home. 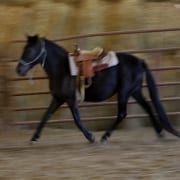 Amarosa has been adopted by Briana Apgar!

We are so happy to see her go to her new home where she is much loved.

Manteo is a stunning black stallion adopted by Steve Edwards of Smithfield, VA. Manteo had a severe locking platella which required surgery from which he is now fully recovered. He leads an active lifestyle and has completed several trail rides consisting of 50 miles in one day. 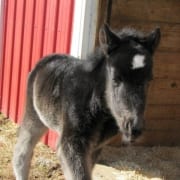 We are happy to announce that Stormy has been adopted by Van and Donna Overdorff of Indiana, PA! He is going to an excellent home. Van and Donna are also the proud owners of another of our Colonial Spanish Mustangs, Curly, adopted in 2009.

We would also like to thank Nancy Talley for her time and resources in fostering Stormy until he could find his new home!

Kelly and Joshua Roche are now the proud owners of Edward Teach! Edward Teach was rescued from the wild herd after suffering a severe injury to the right side of his neck. He was nursed back to health with the excellent care of the Dominion Equine Hospital and Steve Edwards of Mill Swamp Indian Horses. He has made a wonderful recovery and we are so happy that he has found such wonderful adopters! Good luck Kelly and Joshua!