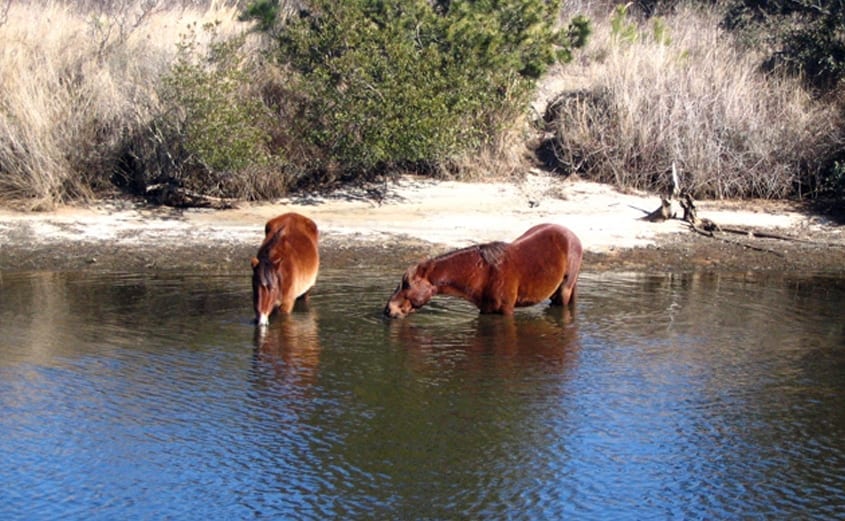 COROLLA – The recent deaths of seven Chincoteague, Virginia, ponies from a particularly nasty pathogen found in standing water has put the caretakers of the Corolla wild horses on alert, although so far there is no indication of the disease on the Outer Banks.

Commonly known as “swamp cancer,” the sickness in the wild Chincoteague ponies was caused by a fungus-like organism in stagnant water that can enter cuts or scrapes, according to a Dec. 31 article in the Washington Post. An infected horse will typically develop large lesions on their legs, belly or genitals. If not caught early, the disease, pythiosis, is usually fatal.

About 100 horses roam freely on the northernmost tip of the Currituck Outer Banks, a 12-mile-long and a mile-wide, ocean-to-sound area bordering the Currituck National Wildlife Refuge. In addition to undeveloped beach and marshland, the horses’ total 7,500-acre range includes the unpaved community of Carova, where about 200 residents live year-round and thousands more visit every summer.

Heavy rains in the last several years have created especially wet conditions in the horses’ habitat, Langone said, making it impossible for the animals to avoid standing water.

“There’s not much that we can do actively except make people aware about what they can do,” she said.

In an update posted on the Corolla Wild Horse Fund Facebook page Wednesday, residents and visitors in the off-road areas were asked to be on the lookout for any sharp items that could wound the wild horses.

“CWHF is currently working on an informational flyer that will be distributed to property owners on the 4 x4 (off-road area) encouraging them to clean up any debris or trash that could cause cuts or scrapes on the horses,” according to the post. “We will also be distributing examples of what to look for in case of an outbreak (like pictures of Pythiosis lesions) and ask people to call or report any horse they see with open cuts and scrapes, or suspicious wounds.”

Meg Puckett, the herd manager, said that they’ve received numerous inquiries from concerned Corolla wild horse lovers since the first Washington Post article about the infliction in the Chincoteague ponies came out in November.

“It’s been on my radar for months,” she said in an interview.  “We’re not raising the alarm bells yet, but we’re being proactive.”

Puckett said she has talked in depth with the horse fund’s veterinarian with the Dominion Equine Clinic in Hampton Roads, Virginia, from whom she learned about a new vaccine that has had some success in treating infected horses at early signs of the disease.

But the vaccine, which has not been approved yet by the Food and Drug Administration, does not guarantee a cure and still has limited availability.

That’s why the horses’ caretakers need the public to keep an eye out for wounded or infected horses. Lesions, which are itchy, almost look like a boil – but worse, Puckett said.

“It looks like a big, open sore, basically,” she said. “Just fleshy and gross.”

Until recent years, swamp cancer outbreaks in horses had been mostly confined to the warm and muggy Gulf Coast region. Puckett said she had no knowledge of the disease in any domestic horses in southeastern Virginia or northeastern North Carolina, but she worries about warmer weather and fewer hard freezes in the region and on the Outer Banks creating the same conditions for the pathogen that befell Chincoteague’s ponies.

“Yeah, it’s climate change,” she said. “It’s been hot. It’s been wet. You’re going to start seeing things like this.”

Like the Chincoteague herd, the Corolla horses are a cultural icon rooted in centuries-old maritime history and legendary links to Colonial-era Spanish Mustangs. Both populations are managed with respect to their wild and free state, with mostly hands-off care. For instance, the Corolla horses are not vaccinated at all, Puckett said, although it doesn’t mean they’ll always be ruled out. But the only routine medical intervention the horses currently receive, she said, is non-hormonal birth control for the mares.

Until 1985, there was no paved road to Corolla, where the horses had lived in the wild for centuries. As development increased in the 1980s and 1990s, interactions between the public and the horses spiked dramatically and dangerously. According to the Wild Horse Fund website, between 1985 and 1996, 20 wild horses were killed by vehicles on N.C. 12, the highway between Duck and Corolla.

Eventually, volunteers built a fence on the northern end of Corolla and at the Virginia-North Carolina state line, where a sea-to-sound fence is occasionally defeated by some horses. Langone said that a persistent harem of six horses that kept circumventing the fence were recently relocated to the Horse Fund’s farm in Currituck County. A yearling colt from the group, she added, was just adopted to a new home where two other adopted Corolla horses reside.

The horses at the Currituck farm are being monitored closely, Puckett said. They are also removed from pastures that have not drained after storms.

And even though the wild horses cannot be monitored as closely, she is being extra vigilant and taking the risk of the deadly disease seriously.

“It is a real big concern,” Puckett said. “It makes you worried about what’s coming down the pike.”

Live from the rescue farm with Raymond and his goat friend Sonny!

A few people have asked for a live video of Raymond, so tune in this afternoon at 5pm EST and we’ll go live from his highness’s pasture. We can talk about his history on the beach (yes, I’ve got a baby pic!) and his life on the farm. See you in a couple hours! #InternationalRaymondDay #whynot ... See MoreSee Less

Raymond says hi! He has been busy with the following:

He'd like to remind everyone to stay home and stay safe because he misses seeing you in person and wants to get back to our regularly scheduled open houses soon! ... See MoreSee Less

We Bought the Farm!