Blog - Latest News
You are here: Home / News / Raymond the mule taking his place among the most famous Corolla wild h... 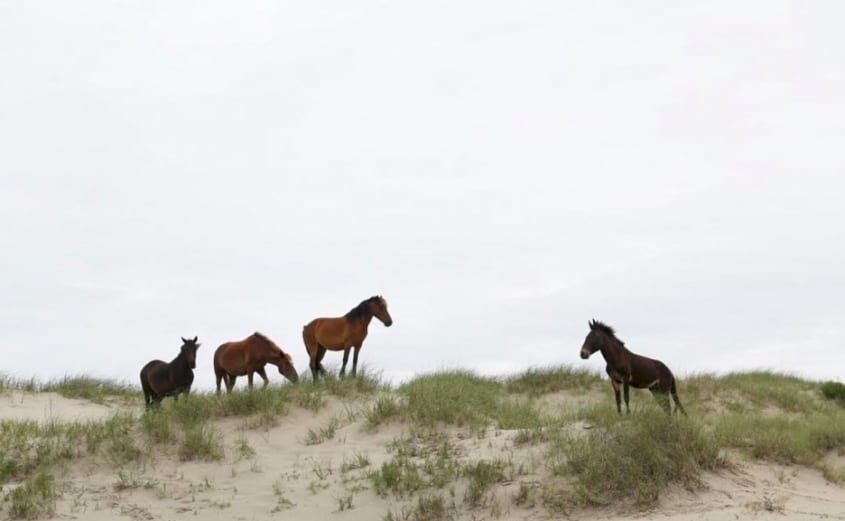 Raymond the mule posed dramatically on a dune overseeing his harem of mares — all three of them Corolla wild horses.

Nevermind that he is smaller than his mares and the stallions that regularly take them away. Forget that he is a mule and can’t reproduce. Don’t count it against him that he is more than 20 years old and a little worn. Oh, and his noisy braying doesn’t exactly conjure up visions of the mythical horse Pegasus.

He stood there with his large ears erect and his scrawny legs straight, ready to take on anything that challenged him.

Raymond has gained fame for his brash personality, his feistiness with larger stallions and his loud calls.

His presence and his mares Tuesday drew the attention of vacationers in the community of Swan Beach, a cluster of beach homes set within the four wheel drive area of the Currituck County Outer Banks. People stood on upper decks watching and taking photos.

At least six large open-air vehicles from wild horse tour operators drove by for a look as the driver guides explained the famous big-eared mule. People in the trucks ooohed and aaahed.

Raymond often scraps with bigger stallions trying to mate with his mares. He ducks in low and bites at their legs, and he flips around and kicks with his back legs. He often wins. Sometimes he doesn’t.

If he loses, he wanders alone for a while. The victorious stallion will take his mares and sometimes impregnate them. Raymond might win them back in a few days or weeks. If a mare gives birth while he’s in charge, Raymond adopts the foal and cares for it as if it were his own.

People unfamiliar with Raymond will come to the Corolla Wild Horse Fund office to say they thought they saw a mule among the horses. Could that be possible?

Some approach herd officials to say they have heard loud, unnatural sounds coming from one of the horses. It must be sick. No, they say, it’s just Raymond.

He is the son of a donkey that once belonged to a petting zoo in Virginia Beach, said Ernie Bowden, a longtime Carova Beach resident and former cattle farmer in the area before all the development came.

Raymond’s father hails from a long line of Sicilian working animals, Bowden said. The donkey got frisky with one of the wild horse mares and sired a foal, Bowden said.

Raymond comes from naturally intelligent, hardy and adaptive stock, but he’s had his troubles.

Two years ago, his hooves grew too long and were causing him pain, Puckett said. Wild horses naturally wear down their hooves by being on the move in the abrasive sands. Raymond’s hooves were not wearing off. Puckett and a veterinarian reluctantly decided to try the risky procedure to sedate him and grind down his hooves. He recovered soon and returned to his aggressive ways.

“It was like he was a new mule,” Puckett said.

Raymond is an important part of the wild Corolla herd and takes his place in the lore of famous horses such as Little Red Man, Roamer and Amadeo.

Little Red Man frequently ventured into the village of Corolla where he would steal pizza from trash cans and raid roadside vegetable stands. Visitors often captured him in photos as he grazed in the neighborhoods. Roamer gained notoriety for often leading his mares around the fence intended to contain them in the four-wheel-drive area north of Corolla. He appeared on Currituck County brochures advertising the Outer Banks. Amadeo, who is blind, lives on the Grandy farm after being rescued from a rip tide a few years ago. He often appears at public events for showing off wild horses.

Raymond is among the legends of the herd now, Puckett said.

“I can’t express how good he looks for his age and the rough life he’s led,” Puckett said. “He is tough. He is too stubborn to die.”

Live from the rescue farm with Raymond and his goat friend Sonny!

A few people have asked for a live video of Raymond, so tune in this afternoon at 5pm EST and we’ll go live from his highness’s pasture. We can talk about his history on the beach (yes, I’ve got a baby pic!) and his life on the farm. See you in a couple hours! #InternationalRaymondDay #whynot ... See MoreSee Less

Raymond says hi! He has been busy with the following:

He'd like to remind everyone to stay home and stay safe because he misses seeing you in person and wants to get back to our regularly scheduled open houses soon! ... See MoreSee Less

Nature Up Close: Wild Horses of the Outer Banks