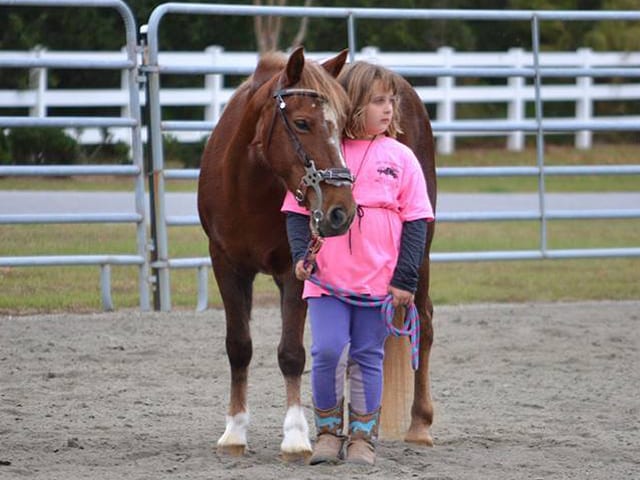 Tresie is a 13 year old mare who was rescued from the wild in 2006 with a severely injured right hind hoof. After surgery and a cast for 6 weeks she recovered and is now completely sound. Tresie was adopted by a great family in 2012 but came back to CWHF in the spring of 2017 due to circumstances beyond the family’s control. We were so thrilled to have this lovely mare back on the farm, but we were even more thrilled when she found her new little girl. Grace is a member of the Wolfpack 4-H club and worked with Tresie under the supervision of our trainer. The Hampton family adopted Tresie in the summer of 2017 and she now lives on their Currituck farm with other horses, goats, and her best friend Grace.

Important Response to COVID-19: THE MUSEUM & GIFT SHOP ARE OPEN! MON-FRI 10AM-4PM • ONLINE STORE IS OPEN • PORCH PICK-UP IS AVAILABLE • REHAB FACILITY/FARM IS NOT OPEN AND MUSTANG MORNINGS ARE OVER FOR THE SEASON Learn more