Blog - Latest News
You are here: Home / News / Corolla wild horse who was a favorite among visitors has died 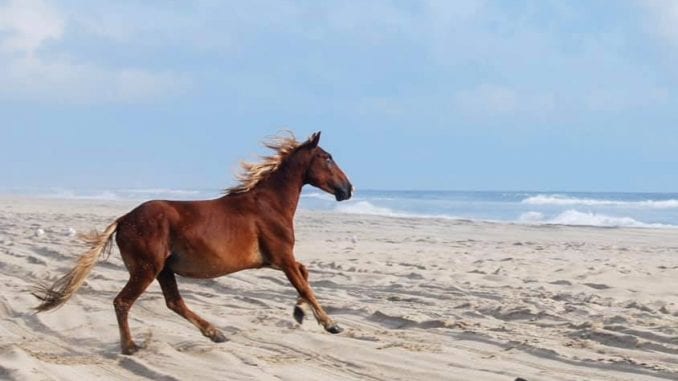 The blind Corolla wild horse that was once a king of the underdeveloped beaches died Friday. He is possibly the only wild horse saved by an ocean rescue team. Several weeks ago, Amadeo became increasingly stiff in his legs and hips and unable to move freely. He could not get up after falling Friday, according to a social media post by the Corolla Wild Horse Fund.

He died quickly and peacefully, the post said. “Rest free and easy, sweet boy,” it said. “We love you so much and you will forever be in our hearts and in the spirit of everything we do here at the Corolla Wild Horse Fund.

Amadeo spent most of his 40 years free on the beaches north of Corolla and was well known as a stallion who fought for his harem of mares. He was already blind in one eye when a stallion damaged the other eye in a battle for supremacy seven years ago, according to Pilot archives.

He ran into the ocean where he was caught in a riptide that carried him away from the beach and more than a mile down the shore. An ocean rescue team used flotation buoys to push him to safety on the beach. It was the first time in anyone’s memory the Corolla ocean rescue team had saved a wild horse.

Afterward, he was retired to a farm in Grandy for aging and wayward wild horses where he became a favorite of visitors. He appeared to enjoy interacting with people including children who loved to pet him. He was one of the horses who used a brush fixed on his halter to paint watercolors sold by the Corolla Wild Horse Fund.
https://www.corollawildhorses.com/wp-content/uploads/2020/03/Amadeo-King-of-the-Beach.jpg 381 678 Corolla Wild Horse Fund https://www.corollawildhorses.com/wp-content/uploads/2019/02/CWHF-logo.png Corolla Wild Horse Fund2020-03-10 14:03:152020-03-10 14:03:15Corolla wild horse who was a favorite among visitors has died

Good morning! We have something to celebrate today - the first foal of 2020! The family is way back in the woods and marsh so we weren’t able to get close enough to them to determine the sex of the baby but we can see that mom and foal are both in excellent condition! Looks like the baby is bay with two socks and a star. We will be giving all the 2020 foals ‘A’ names this year in honor of our sweet Amadeo. He is surely keeping a close eye on this little one. 🥰 ... See MoreSee Less

📹 Tune in tomorrow at...shall we say 2pm EST, give or take a few minutes? We’ll do a live video from the beach, where we’ll hopefully find some horses to watch and talk about. They’ve been very active this week, enjoying the spring weather (and grass!). ... See MoreSee Less

Quarantine self care tip of the day from Ducky and Buster: Take a nap! ... See MoreSee Less

CWHF Response to the Coronavirus (COVID-19)
Scroll to top