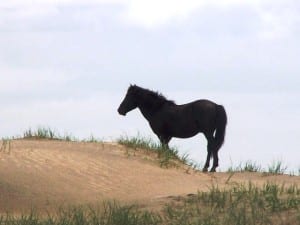 Today is my birthday. Let’s just say I’m old enough to be getting membership requests from AARP. It is said that with age comes wisdom but the older I get, the less I understand why it is so hard and sometimes impossible for some people to do the right thing.

The Corolla Wild Horses Protection Act mandates that the Corolla Wild Horse Fund can manage the wild herd that has lived on the Outer Banks for nearly 500 years, at the SCIENTIFICALLY recommended minimum of 120 to 130, with periodic introductions of mares from Shackleford Banks to try and reverse the Corolla herd’s current spiral into genetic oblivion. The only other remaining wild herd of Banker strain Colonial Spanish Mustangs left has been managed successfully at 120 to 130 since 1998 on Cape Lookout National Seashore/Shackleford Banks. Those horses live on 3,000 acres and the Corolla Horses have access to approximately 7,544. The Currituck Wildlife Refuge comprises 3,000 of the 7,544 acres available to the horses and our most recent aerial count documented only 8 horses on USFWS property.)

At issue is the United States Fish & Wildlife Service’s continued insistence that the herd size be managed at a maximum of 60. According to one of the nation’s leading equine geneticists and expert on feral horses, 150 is the number needed to maintain genetic diversity (once you have attained it) in a wild herd. Peer reviewed science has shown that the Corolla horses are not only highly inbred with extremely low genetic diversity, they are down to one maternal line. In contrast, the Shackleford Banks herd has three maternal lines.

On February 6, 2012, the United States House of Representatives did the right thing. They passed the Corolla Wild Horses Protection Act unanimously. The bill’s sponsor, Walter Jones, (R, NC) did the right thing by also ensuring that the bill had a good balance of bipartisan cosponsors as it moved to the Senate. Senator Kay Hagan (D, NC) sponsored the bill in the Senate. Governor Bev Perdue supported the bill. Our hopes were high, however, the bill languished in the Senate Environment and Public Works Committee while USFWS and Ducks Unlimited worked behind the scenes to kill it, sending letters to committee members and the public containing false information. Congressman Jones, the ASPCA, the Humane Society of the United States, the Animal Welfare Institute, and others, all did the right thing and tried fervently to have Senator Hagan garner support for the Corolla Wild Horses Protection Act. The bill that is the only hope for the very horse that the state of North Carolina designated as one of their state symbols, was allowed to die in committee.

Today the Wolfpack 4H Club gathered at the farm for a meeting where they discussed horse colors and markings, then went on a scavenger hunt to identify the rescued mustangs. They also worked on their project books, which feature all the things these amazing kids do with the Corolla mustangs all year long. From advocacy for the wild horses to training and caring for the horses on the farm, these young people are already doing their best to protect Banker horses for generations to come. We are so proud of them! 🍀🐎 ... See MoreSee Less

We're on the move! Come visit us at our new location, the Gray-Lewark House at 1130 E, Corolla Village Road, in between Island Bookstore - OBX and the Corolla Chapel. We'd like to thank Twiddy & Co for welcoming us back to the Historic Corolla Village. It feels so good to be home! Looking forward to an exciting season, with many more to come. ... See MoreSee Less

Freedom, Ducky, Vivo, and Buster had the zoomies this afternoon at the rescue farm! After a week of unseasonably warm temps, today it didn’t even get out of the 30s. Wind chills were in the teens! 🥶 Even had some snow flurries this morning. Hurry up Spring! ... See MoreSee Less